Sadly, Fèis Thiriodh is over for another year, but what a week it was! Still on a high from the success of last years 25th Anniversary, 2016 proved to be just as successful and enjoyable!

The week kicked off on Monday morning when the star studded line up of tutors gathered at Tiree High School to introduce themselves to their pupils for the week! Each year Fèis Thiriodh is very lucky to host a variety of very talented musicians and performers and this year was no different. Tiree’s own Eilidh ‘The Ceilidh’ MacFadyen was this year in charge of accordion, living up to her name and providing plenty of music and craic throughout the week. She was joined by her fellow Dùn Mòr band members – Mairi Innes, teaching drums and Micheal Steele on flute and whistle. Robert Robertson was this year’s guitar tutor, Alastair Currie from Islay led the Gaelic singing tuition, Craig Espie was teaching fiddle with and keyboard was led by Tara Rankin. We were also very happy to have another talented Tirisdeach back to tutor, as Gordon Rowan led the piping and chanter classes.

It is not only music tuition that is on offer at the Fèis. Local, Iain MacKinnon led a Gaelic conversation class, Iona Cairns was teaching Highland dancing and John Angus MacKinnon and Ishi MacLean led drama and film-making classes. Not only that, the Fèis also offers opportunities for all ages below 8, with Fèis Bheag running alongside the main classes and a 30 minute morning slot, Fèis Bheag Bheag for those under 5. These sessions were led by a group of enthusiastic tutors, Adam Smith, Mhairi MacKinnon, Iona Brown, Linda MacLeod and Donna MacLean.

As an island we are renowned for producing very talented musicians and performers and we hope that Fèis Thiriodh is helping to encourage and inspire the next generation. There were over 80 adults and children registered to take part in this year’s event, an excellent number for our small island. It is very encouraging that after 26 years of events, that Fèis Thiriodh is still attracting people to the island, with new faces appearing each year! 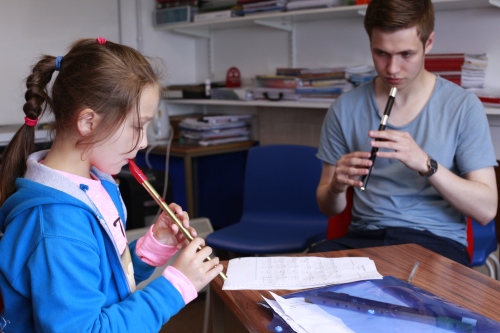 The workshops were nicely complimented with a variety of evening events which were open to the public. On Monday, we all gathered in a busy An Talla to listen to the excellent Tutors’ Ceilidh, which included performances from all of the tutors involved in the week, an excellent start to a week of music! On Tuesday we held our very lively children’s dance. Again music was provided by a variety of the tutors, with the Fèis Bheag tutors helping out with dances and games. On Wednesday we had one of the highlights of the week as we all departed Tiree and made for Barra and I am sure they must have heard us coming as our tutors, pupils and members of the public kept us well entertained the whole cruise up! Unfortunately, when we reached Barra we had to abandon our usual strip the willow on the pier as it was very wet, however with a special thanks to CalMac for being very accommodating, a group from Fèis Bharraigh were allowed on board to entertain us with dancing and tunes and we even managed our famous strip the willow down the aisle of the Clansman! When we returned to Tiree, many made for the ‘Lean To’ for some more tunes and a bite to eat which was laid on by The Scarinish Hotel – mòran taing!

As the week began to wind down, Thursday was more of a low key evening event as we held a screening of Tiree Films. The two short films which were put together by the very talented Jack Lockhart, containing a variety of very interesting footage, some from many many years ago. Jack put together the films on request of the Fèis and what an excellent job he did. The second film focused on newer footage, much of it done by pupils at the school. We hope to be able to show a second screening of these films in the winter time for those who missed it first time round. On to the Friday finale – the last dance! There is no better way to finish of Fèis Thiriodh than a traditional Tiree dance! Music was again provided by some of our tutors, which included Eilidh on box, Tara on piano, Robert on guitar and vocals, Kyle Orr on pipes and whistle and Mairi on drums. There was an excellent number through the door and everyone was up dancing and enjoying themselves – a very fitting end to Fèis Thiriodh 2016!

The committee would like to thank everyone who has been involved in creating yet another fantastic event! Special thanks to all of the tutors who make the week so enjoyable for all of their pupils and the public that they entertain. To all who attended the workshops, the evening events, bought raffles, donated raffles, those who worked in the bar, Josie and her team for providing food throughout the week, all at the school who helped to assist, CalMac, Fèis Bharraigh, The Scarinish Hotel and everyone else involved. Another special thanks to all of the committee who work so hard throughout the year and over the week of the event to make it all happen! Fèis Thiriodh 2016 is only just over, but plans for 2017 are already in place with the dates set as the 3rd – 7th July! We will be holding our AGM in early 2017 and would encourage anyone to come along and get involved!

Hard copies of the programme can be purchased for £1 in The Coop.

Carrying on from the success of last year’s 25th anniversary celebrations, Fèis Thiriodh is getting ready to launch for 2016!

The popular week-long event will this year take place from Monday 4th to Friday 8th of July and the committee are looking forward to welcoming a host of new tutors to the island. This year’s line-up includes the very popular Robert Robertson who will be leading guitar. Local Eilidh MacFadyen will be taking the lead on accordion with Mairi Innes on drums and Micheal Steele on flute and whistle who are all part of Dùn Mòr Ceilidh Band. Alasdair Currie will be taking charge of singing, with Craig Espie from Skerryvore on fiddle, Tara Rankin on keyboard, Gordon Rowan on pipes/chanter, Ishi MacLean will be taking drama, John Angus MacKinnon will be tutoring film making and Iona Cairns will be teaching highland dancing. Local Iain MacKinnon will be returning again this year to take Gaelic conversation.

For those under 8 there will also be an opportunity to get involved in the Fèis by attending Fèis Beag which runs daily, this year’s tutors are Iona Brown, Mhairi MacKinnon and Adam Smith. And not to leave the under 5s out, Fèis Bheag Bheag will also be running morning sessions for 0 – 5 year olds focusing on music and rhymes and will be led by Linda MacLeod.

Workshops will be running throughout the week from 10.30 am to 3.30 pm and everyone is encouraged to sign up as soon as possible. Registration sheets are available to download from the Fèis website by clicking here and will also be getting distributed through the school.

As usual alongside the workshops there will be other events taking place throughout the week, starting with on Monday the popular tutor’s ceilidh will take place, giving everyone the opportunity to have a listen to this year’s very talented tutors and on Tuesday a children’s dance will take place. Wednesday will see the Fèis depart Tiree for the day, when everyone is invited to join the tutors for a few tunes on the very popular ‘Muse cruise’ to Barra! On Thursday we hope to screen some Tiree related films that have been put together and then on Friday the event will come to an end with our annual Feis Dance, which is always an excellent night! 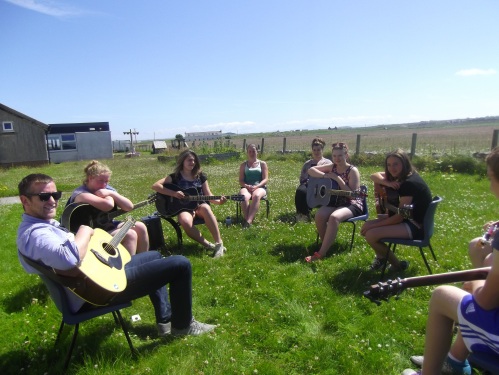 Fèis Thiriodh has been running very successfully on the island for the past 25 years and we encourage as many people as possible to get involved in the event, whether you are taking part in daily workshops, attending evening events or just popping into the school to have a look at what is going on.

To keep up to date with all the latest information follow us on Facebook! We hope to see you all in July!

booking forms  must be returned by Wednesday 29th June.